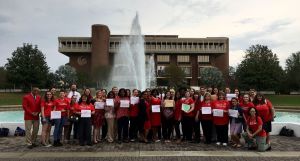 Over 700 students passed by the Equal Pay Day table in the Student Union Tuesday.

Volunteers with the Office of Student Involvement and the Women’s and Gender Studies program handed out stickers, and offered students the opportunity to put words to paper describing why they need equal pay. The student then posted their thoughts on display in the middle of the Student Union.

“It’s to bring awareness, because I’m finding that a lot of people don’t know exactly what Equal Pay Day stands for,” interdisciplinary graduate student LaToya Crittinden said, “so I take the time to explain how it works and they’re like ‘oh I didn’t know about that’ and the kicker is when you start explaining how different it is by ethnicity and race and their like ‘what?’ ”

“I think there’s not a lot of awareness about it. That a lot of people still think the pay gap is a myth and it’s not, so I think that raising awareness that it affects all of us, even here at UCF there are faculty members who don’t make the same, there are student workers who don’t make the same and the pay discrepancy is gender based, it affects all of us,” Office of Diversity and Inclusion member and alumni Victoria Weston said.

“We absolutely need awareness raised, and so I’m here today not only for my colleagues but for my students as well,” UCF associate lecturer at the school of performing arts, Holly E. McDonald said. “It goes beyond just a women’s issue it’s a family issue.”

After tabling all day, the volunteers took the time to pose and pay homage to Rosie the Riveter, a fitting icon for the day’s events. Throughout the day students were invited to the reflecting pond at 4:15 p.m. to take a group photo marking the day and support for the UCF community.

Forty people showed up for the photo wearing red to show just how “in the red” women and minorities are with their income.

Students can learn more about the wage gap and the Equal Pay Act by visiting https://www.eeoc.gov/laws/types/equalcompensation.cfm